I barely set foot outside yesterday. The temperature hovered around the 44 mark all day and it rained more or less non-stop. Today has started out grey, cold and damp.


Still, yesterday wasn’t all bad. I needed some time to decipher and write up the notes I took on my trip to Ainsworth. And then I discovered that a computer glitch earlier in the week had resulted in my losing a chunk of work, which I then had to re-write. In fact, I am still only halfway through it. It wasn’t as damaging as it might have been: I am a great believer in re-writing and had planned to go back over it during the next week or so – but I am kicking myself for neglecting to back up my work; and when my computer guru, the Chainsaw, reads this he’ll be firing off an admonitory email.


Going back over my notes yesterday I realised that I hadn’t explained Keevin’s connection with the Blaine Ellis murders. One of the victims, Alleen Mensinger, was his cousin – the daughter of his mother’s brother, Uncle Lloyd ‘Skinny’ Jones. (His mother’s family were called Johansen, and came from , but their name was amended to Jones upon arrival in the , or soon after.) So he attended the funerals, which, he recalls, took place on a bitterly cold March day. The road to the cemetery at Ainsworth was covered with ice, and he remembers his mother anxiously gripping the seat as the driver of the car sped along. He seemed in a hurry, as did the undertaker. It turned out that they had another funeral the same day and were anxious not to be late. The murdered couple’s child, he told me, was taken to and raised there.


There are a few more loose ends to clear up from Astrid’s tape. Helga, the eldest of the Arent children, died in childbirth in her twenties. Her husband took the baby, Clydie, to , and started a new life. Neither Herman nor Martin ever married. Martin is the only one of the offspring to be buried up at the cemetery here, having barely outlived his mother. Astrid also mentioned, but gave no details of, her mother having a breakdown and spending a full year in a sanatorium. The children, she said, were sent to an aunt; I am not sure that she said which one. She was living by a lake which was, I think, her source of drinking water; either that or the children drank from it, the result being that Astrid got typhoid fever.


Astrid’s tape is full of interesting details, but of course it raises almost as many questions as it answers. That’s so often the way when people reminisce. She wasn’t being interviewed: she sounded very much as though she were reading from a script she had put together, so nobody interrupted and asked her to expand, and she glossed over a number of interesting points. But that’s the nature of research: you’re glad to pick up new pieces of the jigsaw, but you’re often left to make the best sense you can of them.


Astrid mentioned that she attended the Center school, up by the cemetery here, through 6th grade, before going on to Merriman. Her three sisters, she said, all became teachers. Her reference to the schoolhouse reminded me that I’ve never recorded the story Kitty’s father told me when I bumped into him up there one day. I may not have got this entirely correct, and will make a point of checking on the facts. Roughly, it goes like this. After it had stood empty for some years he bought the old place for $50, thinking to haul it to his place as a barn or workshop. But he couldn’t move it, and after several tries was happy to trade it to a neighbour in exchange for a used dish-washer. This guy couldn’t shift it either, so he persuaded a third party to take it off his hands for a few bales of hay. He thought he’d got a good deal – and so did Kitty’s dad. The house stayed where it was, and they kept grinning smugly to themselves until a snow came – and then it disappeared overnight. It turned out that the fellow had put skids under it and dragged it away to his place where it now serves as a hay-barn.


When I was at the Arents’ place Keevin took me out to see his small herd of cows which are grazing on land he leases, about ten miles from his home. To get there we drove through a ranch owned by a man of Swedish ancestry who is just now in hospital. Keevin drops in every day or two to feed the horse and the cats. The man’s father came to the at age 16. His very first job of work was as a delivery driver for a moonshine outfit. He ran a fast car, but one day when he was being chased it let him down, and the cops were gaining on him. He knew what to expect if he were caught – a long stay behind bars – so he abandoned the vehicle, gave it up and found a new career. He died not so long ago aged 101. While we were out on his place we came across this abandoned root cellar… 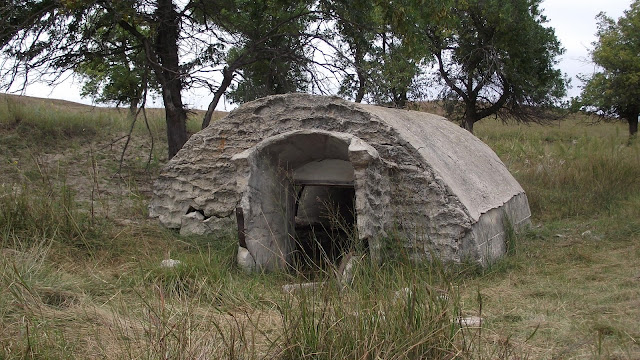 … and while I was photographing it I snagged a number of sand-burs on my shoe-lace. For the benefit of my British readers, here’s what they look like. These ones are small, and not quite mature, but they offer a hint of what happens if you absent-mindedly step in a patch. The spikes are viciously sharp, and picking them off by hand is not advisable.  Keevin’s advice is, always have a knife handy to scrape them off. 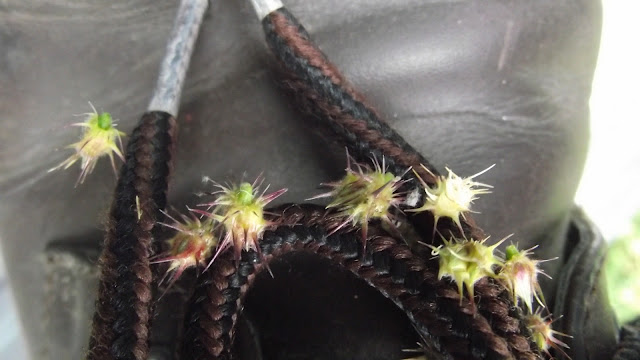 Well, my porridge is almost ready, the temperature has crept up to 49 degrees, and I need to decide what to do today. Nip over to Valentine and get into the land registry, or continue to re-write the thing I failed to back up? One or the other, I guess.
Posted by Alan Wilkinson at 16:17:00