I took a risk the other day, hinting that I was overcome with loneliness now that all the visitors have gone. Was I about to start one of those navel-gazing trips my publisher warned me about? Was I going to scare off my growing band of readers (189 yesterday) with a plunge into gloom and despair?
Nah. Today was another day. I woke up feeling good, and things got better by the hour. I must make a point of emailing my better half back in the U.K., for it was she who wrote, just the other day, ‘Trust the place; I am sure it will bring you new things to do and think about.’ What a wonderful thing to have a wise woman in one’s life – especially when you do crazy stuff like deciding to live alone in the Sandhills for six months.
The morning was, yet again, grey, damp and cold. 51 degrees when I got out of bed, pretty much the same two hours later when I slipped and slithered up the hill and along the trail to the ranch-house: 15 mph on the good stretches, less than that on the gumbo. I’d been emailing for maybe ten minutes when the dogs stopped barking at me and turned their attention to a vehicle heading in from the direction of the highway. Moments later I was looking at five smiling faces and a frisky young pup, the first wave of the annual Arent family reunion. The Arents, in case you’d forgotten, are the Danish family who settled down here around 1904 and built this place, by hand, some twenty years later. 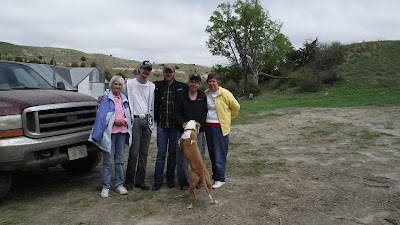 There’s a lot to remember about what these people told me, but that’ll wait until tomorrow. In a way, this posting is about the effects of solitude and the delights of company. Creature comforts too. And I’ll come to that later. This first party, of whom the oldest member, Frances, is the daughter of Margaret Arent, one of the eight children raised here by Hedvig and Holveg, stayed maybe an hour. They picnicked outside, and left me a plate of fried chicken, potato salad and some delicious home-made brownies. In return I made them hot, brown, sweet English tea, which they pronounced good.
When they had left I just had time to clear my plate, go back to the ranch-house and complete my online business before a convoy of three more vehicles arrived. I should add that all the visitors had first visited the cemetery along the road there and decorated the family graves. It’s a Memorial Day tradition for them.
The first party had insisted on eating outside in 57 degrees with a stiff wind and no sun. I would expect no less of people with Viking blood in their veins and I salute them. These are a people who sailed to a thousand years ago in open boats, a people who colonised ; even more impressive, they elected to settle in the north-east of because it was so mild. Now that’s what I call tough. Slightly crazy, but tough. It took me thirty years to acclimatise myself to the weather up there. 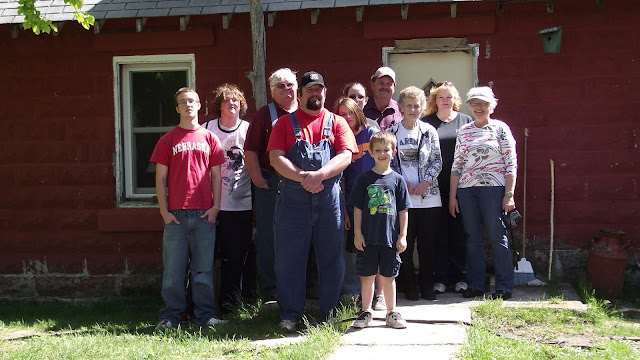 This second wave of visitors also had a picnic, and they got lucky. The sun came out, the temperature shot up to 70, and the wind dropped. I had to come clean and admit that I’d already had one free lunch, but they still gave me a large bag of fried chicken which I’ve since boiled up with carrots, onions and potatoes to make a hearty stew that’ll feed me for three days or so.
After they’d left, a dark cloud rolled in from the west, the temperature plunged back to 53, the wind got up to about 40 mph and whipped up the dust; then it rained, heavily, and the radio gave out a tornado warning for half the state. Normal service had been resumed.
Not that I cared much by now. I was having a treat – and this is where the creature comforts come in. I’d discovered earlier that it is possible to download podcasts of some of my favourite radio programmes. I do this all the time at home, but somehow I’d got it into my head that it was impossible from over here. Copyright or something. But I was wrong, and I have never been so glad to be wrong. I could’ve danced.
Picture me, my belly full of chicken, a glass of single malt whisky in my hand (I’ll explain that tomorrow), sitting in the recliner, listening to one of my favourites, Desert Island Discs. That show has been running since I was knee-high to a grasshopper – well over fifty years, more likely sixty. Each week a well-known person is interviewed and asked to select eight records to take with them to a desert island where they have been shipwrecked - with the records, a gramophone, and a power supply. Yes, I know… but it makes great radio. And imagine my joy at listening to Debbie Harry for forty minutes, talking about her childhood, her family, her career. Magic. And then, to compound my pleasure, NPR run an interview with Keith Richards, whose autobiography I read last winter. I could sit and listen to that guy talking about his music till the cows come home. Forget the drugs: he quit all that thirty years ago. The man is a truly dedicated artist, and remarkably humble. Quite the sage too.
So… creature comforts. I think that a part of me had felt that so long as I was living here I needed to engage with the landscape, the people, the experience of solitude, twenty-four hours a day; that to distract myself with DVDs, iPods (I brought neither), would be to cheat. Then I started thinking about those pioneers, and the violins they brought with them, the pianos, the books, the social events they organised, the dances and spelling-bees; and I remembered that beautiful story of Mari Sandoz, which I mentioned a few days ago, “The Christmas of the Phonograph Records”. Old Jules fritters away his legacy on box after box of wax cylinders, and wakes up the whole household at gone midnight to listen to the new-fangled device; all the neighbours crowd in, and Mary feeds the five thousand as the novelty of recorded music, the joy at diversion, the magic of song, the memories of a dozen old countries, enchants the whole community.
There was a strong strain of self-denial in my upbringing. It’s not a thing you rid yourself of easily. But I’m working on it.
Posted by Alan Wilkinson at 15:26:00