It seems appropriately cool this morning: 64 degrees, cloudy and breezy – and I think I am hearing distant thunder. I needed it to be this way, because yesterday was a hot, sticky, dirty one. At least, it was for me. When those guys made their concrete block mold back in the 1920s they must have congratulated themselves on the rustic, coarse stone look. Yes, but… trying to persuade thick red paint into every nook and cranny, every little hole, required ever more vigorous brush-strokes, and every time I thought I’d got a block covered I’d stand back and spot several bare spots on the under side. By the end of the day my clothes and arms were thoroughly splattered with the stuff. But... all in a good cause. As I can now reveal, the red house is now unequivocally red, at least at the front. 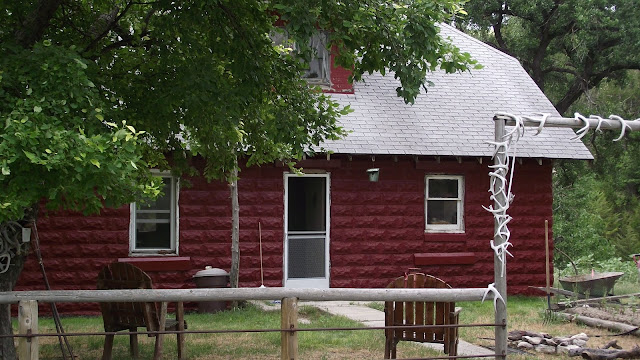 There is, of course, a downside. The trouble with having restored the façade is that the lamentable state of the woodwork is now highlighted. It’s rather like cleaning up your desk, a foolhardy enterprise which simply makes you realise what a mess the rest of your office is. Best left alone, in my opinion. On that topic I take heart from the wise words of a retired nurse I was privileged to have in one of my writing classes some years ago. Mags had grown up in and was as down to earth as most natives of that city. I must have mentioned housework. She told me that with her family grown up, and being alone now with just her dog, she no longer bothered herself with such trivia. Alan, she told me, just wait until the dust on the mantelpiece gets thick enough; then you simply roll it up like a carpet.


However, the die is cast down here. The woodwork needs attention, and Matt is talking white paint. Maybe a fire has been lit. But I think I’ll give the handyman stuff a rest for now. I’ll be around to offer encouragement, and a photographic record, when the roofers show up.
I was up at the ranch house yesterday when I realised that the ducks were conspicuous by their absence. A little poking around revealed that they were in fact sheltering among the weeds – and that their little pond is shrinking at an alarming rate. We need rain. 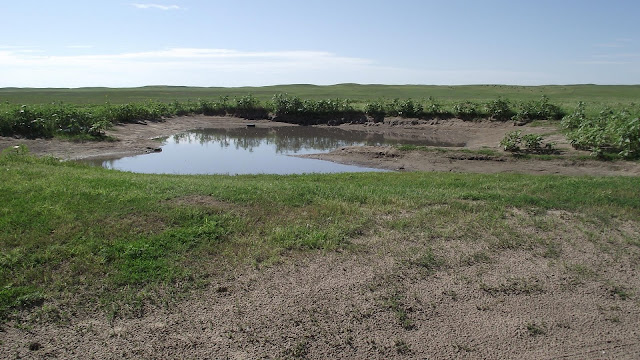 The grasshopper situation continues to blight me. They are still increasing in numbers, and waxing fat. They have also taken to lazing about on the fence rail, the outside chairs, the path, like soldiers who have won a major victory and are lounging around waiting for orders. They were too relaxed yesterday evening to get out of my way as fiddled with my camera barely a foot or two away from them. They really are striking creatures to look at. If they were on our side, as it were, I am sure we would celebrate them in art. 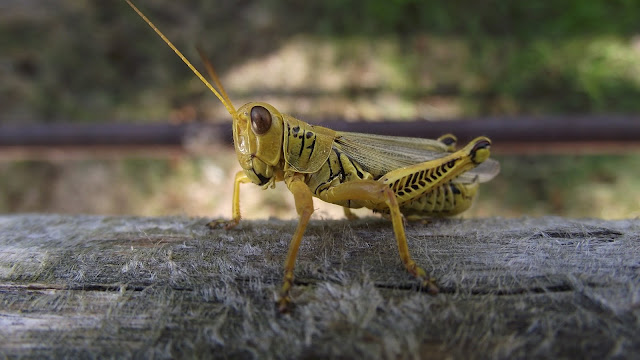 I got to the end of Lonesome Dove last night. A day or two ago I’d had a message on Facebook from a friend back home who told me, ‘They all die in the end.’ He was very nearly right. I can’t recall the last time I was so involved in a movie and its cast of characters, or when I was so sorry to be parting company with them, and I’ve been trying to figure out why. It must have something to do with the age of the principals, but mostly I think it’s about the re-creation of so many western settings which looked so real, and the fact that so much of the action took pace on the cattle trail. Those guys were for the most part dirty, sweaty, unshaven, lean looking individuals. They looked as if they really had been working those cattle – and from time to time they sat down and ate from plates of grub that were suitably plain and unappetising. The amount of violence was troubling to me, and perhaps overdone – although each act of savagery was in itself perfectly plausible. But… great cast, terrific locations, and some superb dialogue. I wouldn’t be surprised to find myself watching it all over again in a few weeks.
Today I ought to take Mercy down to Merriman. There is a hideous banging and clanking sound coming from underneath, and I dread to think what it might be. If I were a betting man, my money would be on a broken leaf spring, but the honest truth is I don’t really want to know. I just want that old thing to keep going for – ten more weeks.
The electricity supply has flickered off, and back on, twice while I’ve been typing this, dark clouds are sweeping in from the northeast – and here comes the rain. Time to crack on.
Posted by Alan Wilkinson at 16:09:00