We’re battening down the hatches. The forecast is for a month’s rainfall today. The theory was that the downpour would affect the Midlands, but as I sit here at 0700h the rain is falling with a tropical intensity, creating a stream along the back lane and flattening the flowers we set out yesterday in the forlorn hope of salvaging something from the wreckage of yet another summer.

Norway. I was going to talk about Norway. We’ve only been back a week, but it all seems a very long time ago. Bergen, where we landed - and spent an entertaining three or four hours  in the airport re-assembling our bikes - seemed a great town. But then the sun was shining, and the beautifully tended parks were full of handsome young folk in summer clothes. We stayed in the YMCA hostel and were able to enjoy breakfast both mornings on a sunlit terrace up on the fourth floor, looking out over the city and some of the ships coming in and out. 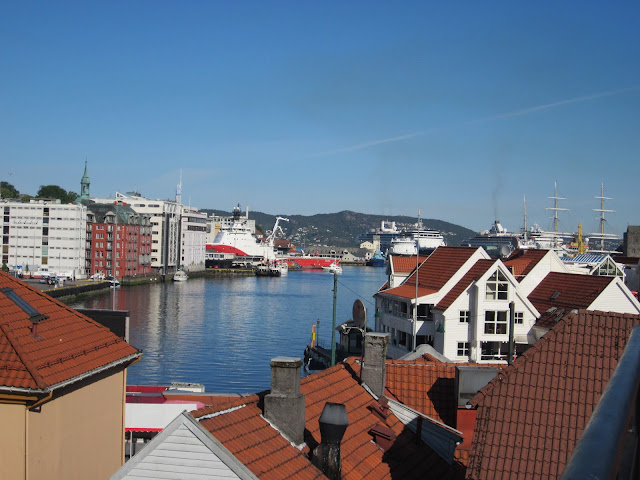 Most of our time there we spent seeking out a shop which stocked the maps of the North Sea Cycle Route, and we did, eventually, find one. (The maps had arrived in a new shipment one hour before we walked into the place.) We bought the two sets we needed - at £32 apiece! - and then set off to find a bike shop. My gears hadn’t fully recovered from the journey, and I wasn’t happy about the state of my brakes. I got both fixed at a very reasonable price. After that, culture: the Edvard Munch gallery (or museum). I find these days that I have a limited capacity for taking in visual images, or information for that matter. What I got from the Munch exhibit - apart from a realisation that the artist had a considerable range of styles and subjects - was that “The Scream”, a work that has achieved almost iconic status, and certainly decorated my bedroom wall when I was a teenager, seemed to represent no more than a fleeting passage in the man’s career. It didn’t seem such a great work of art, either - but then I suspect that a lot of artists, musicians, writers, etc., are saddled with a label based on one specific work that caught the public’s imagination.

For me, however, the highlight of Bergen was the fish market. They had a fabulous range, beautifully dressed and displayed, and the stallholders were all willing to offer a free taste of anything we liked the look of. Better still, they would vacuum pack anything you bought. So, as well as enjoying an excellent lunch on the tables outside - prawns, salad and light beer in the sunshine - we were able to leave town next day with some superb salmon and smoked mackerel in our panniers.

We had high hopes of an easy passage out of Bergen to the south. Many of the roads in Norway, and all of them in town, have bike paths alongside. Trouble is, the Norwegians, not being very good at football, or rugby, or any of the summer sports, have invented a game of their own. It consists of removing the little red signs that point the way for cyclists - or, more cunningly, twisting them around on their posts so that they point the wrong way. I suspect that our overall rate of progress was reduced by as much as 50%, such were the delays as we wrestled with the maps, asked strangers the way - or on many occasions simply took the wrong path, sometimes for some miles, and had to double back.

Now, an admission. I can’t remember the exact sequence of places we passed through. And my diary is sketchy. If there’s one thing this writer didn’t feel like doing it was taking voluminous notes when he was on holiday. However, I do recall that one of our first campsites was on a farm that we stumbled upon after - yet again - losing our way. 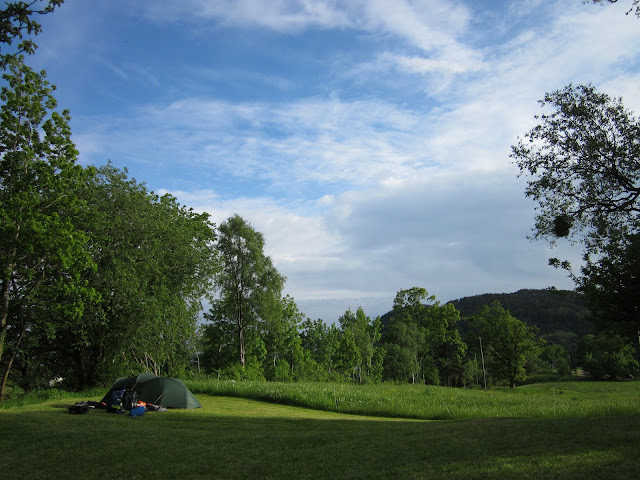 A lady called Inge charged us 100 Norwegian kronor (about £10) to pitch the tent in this field next to the farmhouse, another 20 kr to use her shower. She was an English teacher. ‘I love to meet travellers,’ she said, ‘but the farm keeps me from getting away as much as I’d like to, so I decided to put out a sign and let the travellers come to me.’

One of the delights of this sort of trip, of course, is the chance to wild camp. Wild camping doesn’t have to be in dramatic or scenic places. For me it’s more about the convenience of deciding that you’ve had enough of hiking or biking and… ah, here’s a nice spot to bed down. 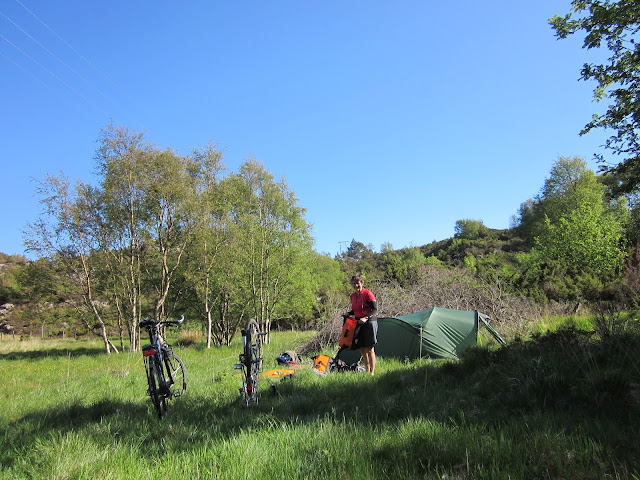 We did find that a lot of spots where we might normally have pitched the tent were actually out of bounds because the grass was long and the hay was about to be cut, but there was no way any harvester was going to negotiate this field.

I’m going to have stop this now and think about food. I need to be fully charged with calories before tackling today’s task. A few months ago I foolishly agreed to give a talk to my brother’s University of the Third Age group about my experiences in Nebraska last year. Piece of cake, I thought at the time. I can ad lib for an hour on that; no sweat.

Ha. The trouble came in the shape of my photographs - which I have somehow managed to scatter through a dozen or more different files and folders on the pc. Corralling a representative sample of them into one place took me all of yesterday, and I must admit that some strong language and ‘scenes of a violent nature’ took place - although kicking the door frame wasn’t the best idea: I think I’ve busted a toe. Anyway, the upshot is that I dare not mess with the 50 or so photos I have chosen, nor with the order in which I have them saved. That means that my talk now has to follow a shape I might not otherwise have chosen. Ho hum. I shall write notes for the talk today - and hope it works.
Posted by Alan Wilkinson at 08:26:00

Email ThisBlogThis!Share to TwitterShare to FacebookShare to Pinterest
Labels: Exasperation - and a broken toe.