In praise of the Trangia stove - and sleeping under the stars 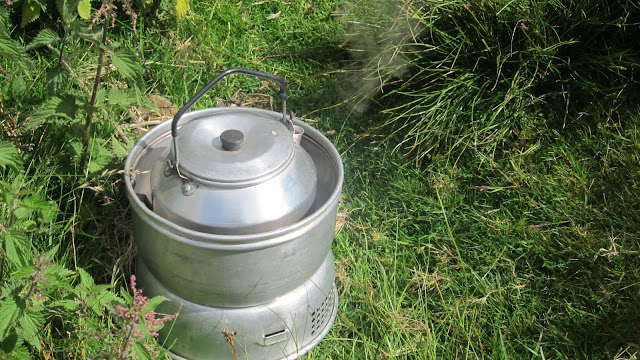 A gentle plume of steam coming from the kettle: it’s one of the most cheering sights when you’ve spent the night under the stars – especially when, as on our outing last weekend, it decided to rain just as dawn was breaking. I don’t think you can beat the Trangia as an all-purpose stove. It’s compact and light. It burns clean fuel (methylated spirit), gives a strong, steady heat, and seems to last forever. My own dates from 1977 and is almost as good as new. As well as making countless morning brews on it, I have cooked steaks and lamb chops on less than half a dose of fuel; and on one memorable occasion in the Spanish Pyrenees I made a very tasty coq au vin, seasoned with wild herbs. Mind you, I did have to refill the vessel part-way through.


Last weekend we were celebrating an anniversary and, being the hardy souls we are – perhaps I mean foolhardy – we decided to take a weekend hike in the Wear valley and leave the tent behind. We’ve both got to an age when we really don’t like lugging a whole pile of gear. So, we travel light – and if it rains, we risk getting wet.


We took the train from Wolsingham to Stanhope and walked back. We’d been aiming for a small stand of beech trees high up on the hills to the south, but with a stiff wind blowing and milky grey cloud coming in from the west, we decided to stay nearer the valley bottom. We also made sure there was a dry shed nearby before lighting our fire, cooking our grub – on this occasion sirloin steak and a huge potato salad, washed down with a very decent bottle of .

I should add a note here on the preparations required for a successful al fresco dinner. When we’re taking steak we season the meat before leaving home – thyme, pepper and perhaps a little garlic. And, not wishing to carry a bottle of oil, we  slap a little butter on the side of each steak before wrapping it. This time we forgot, until after we were on our way. And here’s where I start to wonder just how weird it will all get before we are much older and may be excused a few of our eccentricities. When we got off the train at Stanhope we passed a little station café. It was closed, but the proprietors had yet to clear the tables outside – and there, to our great delight, were a couple of part-used butter-pats. I whipped out my knife, scooped up what was left and popped it in a paper napkin. The inner scavenger: alive and well but requiring occasional nurturing.


I didn’t sleep very well. Unusually, I hadn’t taken the trouble to scout out a nice level, rock-free place to bed down. The fact is, there ain’t many rock-free places up there, especially as we were surrounded by the remains of ancient farmsteads. And I was fretting about the weather. The rain started around four, as per the forecast, and we retreated to the shed. It was built of stone, probably 150 years ago. The corrugated asbestos roof must have been added in about 1950 and was holed in several places. The front wall had parted company with the side wall and was leaning forward, leaving a gap about a foot wide. The doors had long since disappeared. But our rude shelter kept the rain off, and in the morning we were able to brew up in reasonable comfort. By the time we’d had breakfast the sun was coming through and Weardale was, once more, a beautiful place to be.

Rather than scuttle home with wet gear, we climbed across rough sheep pasture to the place where we might have bivvied had it stayed fine, and, while the kettle boiled once more, spread out some of our gear in the sunshine.

From there it was a pleasant four or five miles down to Wolsingham where we’d left the car.


45 minutes later we were home, running a bath and planning another night under the stars. Weather permitting, that will be on a tiny uninhabited island in western , a short rowboat ride from the mainland. We’ll be there next week and reporting on our adventures shortly afterwards.