At the Alderney Literary Festival

I had never been to the Channel Islands, let alone Alderney (pop. 1900). So it was a thrill to be invited to the Literary Festival, which ran Friday 23rd to Sunday 25th March.

I was there to talk about my novel, Cody, The Medicine Man and Me, and the way in which I used  events from my personal and other histories to piece together a narrative.

Boy, did they look after us. From the moment I arrived it was one reception after another, with fine dining nightly - alternating between restaurants and our (very generous) sponsors' homes. (For homes, on this fortress island, read 'fort' in many cases.) 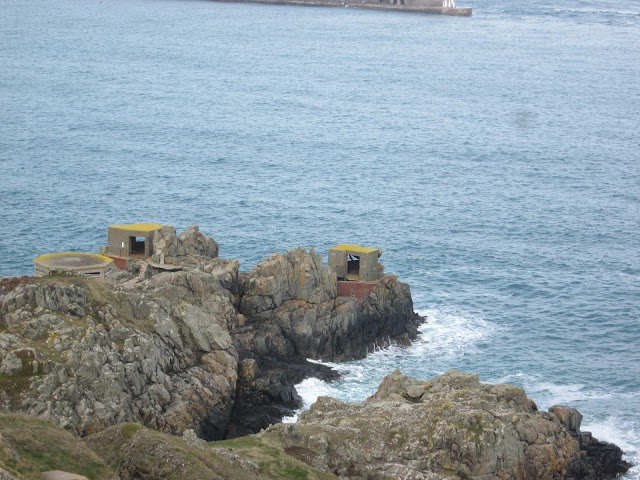 As well as the many visible relics of the German occupation which are scattered around the island, there are extensive networks of underground workings, still being explored to this day. In addition, there are a number of older fortifications built by the British and dating back to the mid- to early nineteenth century. The enemy then was France. 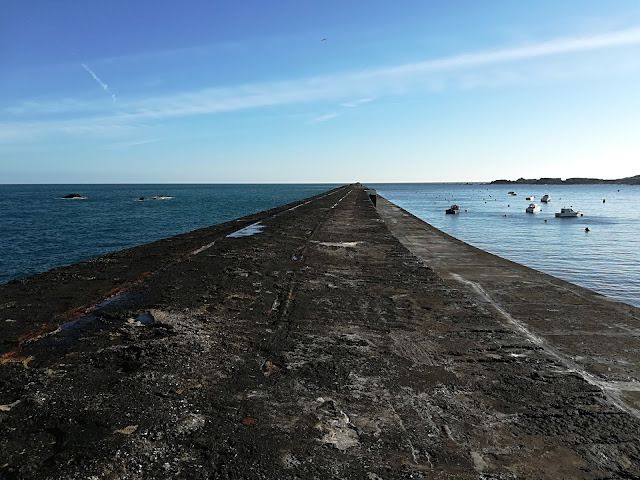 The harbour at Braye is a gentle 15-minute walk from the centre of 'La Ville', as the island's only town is known - and a 20-minute trudge back up the hill. It is protected by this monster of a jetty, built in the 1850s at a cost of over £1,000,000. Its original length was almost 1.5 kilometres, but heavy seas rapidly reduced that to around 900 metres.

I was doubly lucky when I took a stroll on Monday morning, barely an hour before my flight departed: one, the sun was shining for the first time since Friday; and two, they had removed the barricade which stops pedestrians venturing onto it when, as it was all weekend, the wind was blowing huge waves over the top.

Apart from the several literary events I attended, I managed a novel footballing pilgrimage. It happened that the annual semi-final of the Muratti Cup was being played, between the local minnows, Alderney FC, and Guernsey, who play in the English Level 8, the Isthmian League. Their chairman is none other than Matt Le Tissier.

So, on Saturday, I walked the couple of miles to their ground (The Arsenal), paid my £3 and joined 400-odd spectators for a tightly fought game which ended 2-0 to the visitors. Half froze to death,  but enjoyed notching up my 49th U.K. football ground

As well as a short bike ride, when the rain let up, I took a two-hour bus tour and tried to explore 'La Ville' on foot. Hard to imagine, but I got lost a number of times.

If you've never been to the Islands, or imagine that such tiny dots on the map wouldn't entertain you past the first day, think again. I managed to explore just a small portion of Alderney (it's little more than 3 miles by 1.5) and soon realised that I could comfortably keep myself busy for a week or two. (I believe there are 12 pubs, for a start.)

So now it's back to work - or rather, my Speed Awareness course, in Hartlepool, later in the week
Posted by Alan Wilkinson at 16:33:00