Owen Wister and The Virginian 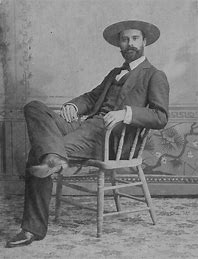 I am delighted to report that a play I wrote almost twenty years ago, and which I thought was lost forever, has popped up on an internet archive. (https://archive.org/details/THECOWBOYANDTHETENDERFOOT)


It’s the story of how Owen Wister came to write The Virginian, probably the most famous western novel in the canon. It was broadcast in August 2001. I’m not aware that the BBC have ever repeated it, and when I checked their radio archive a few years ago there was no sign of it. Then, last week, we had a visitor who was asking me about my interest in the West, and I mentioned this sole foray into drama (leaving aside the ongoing Sherlock Musical project, http://thesherlockmusical.com/)


After our visitor had departed, I decided to Google The Cowboy and the Tenderfoot and there it was, in a non-profit archive out of .


The Internet Archive (https://archive.org/about/) seems to have a zillion items from radio, TV, libraries (public and academic), images and footage of live gigs. It also, for some reason, has a bunch of radio plays, including mine.


I became interested in Wister in the early 1990s when I was teaching an undergrad course on the literature and history of the American West. I gravitated towards The Virginian because it was deemed by many academics to be the seminal western. I enjoyed the book immensely and delved into the author’s life. It was remarkable.


Born into a wealthy in 1860, Owen Wister was never cut out for the banking career his father had in mind. His mother, the daughter of Fanny Kemble (Fanny Kemble - Wikipedia), encouraged him in his love of music. As a young man he studied for two years at the Paris Conservatoire, and took lessons from Franz Liszt. Returning to the States, he went into the bank.


It was some kind of breakdown (they called it neurasthenia) that gave him a way out. The Wisters’ family friends, the Roosevelts, suggested that a vacation in might aid his recovery – as it had  for their son Theodore, the future President.


So Wister took the train west, and in his letters we see, frame by frame, the graphic account of his arrival, by train, at the little town of ; then his meeting with his first cowboy, who had come to collect him. All of this would re-appear in the novel. When he was told he would first be spending the night on the  floor of the grocery store, he asked why they couldn’t go directly to the ranch where he was to recover his health. ‘Because it’s 157 miles away,’ was the answer.


Just about everything he witnessed during his brief stay at Medicine Bow, and on the long journey across Wyoming, as well as several incidents on the range, was recorded in his letters home; and just about everything re-appears in his great novel. Included, of course, is the famous scene at the card table when Trampas calls The Virginian a sonofabitch, and the southerner coolly replies, ‘When you call me that, smile!’


If you visit Medicine Bow, you’ll see that line commemorated everywhere you turn – especially in The Virginian Hotel, where they even have a copy of the book, open at that page, in a glass cabinet in the dining room.


I quickly became fascinated with the ways in which Wister’s actual experiences informed his writing. The result – apart from my later visit to and Medicine Bow - was this radio play. I hope you can take the time to enjoy it.
Posted by Alan Wilkinson at 11:33:00