Hiking in the Balkans

Back from a tough assignment, a week-long hike along sections of the Via Dinarica in and . This was a guided hike. Having never visited the region, we feared the mountains might be a bit daunting for us to negotiate alone. It was organised by a company called Green Visions https://greenvisions.ba/en, based in Sarajevo. Among there aims are ecologically sound tourism, and a desire to show that , and its neighbours, are not war-ravaged moonscapes but home to some of the finest scenery in .


We started our trip in , staying with friends who have a holiday home on the (pronounced ‘Wiss’), a 90-minute catamaran ride from the mainland. 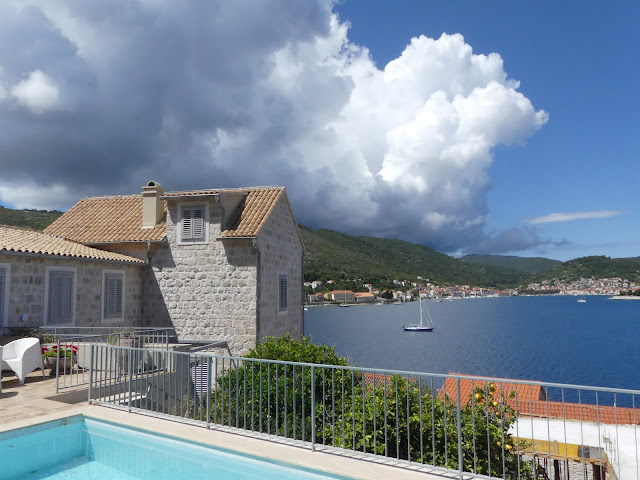 After a couple of days’ rest we met our fellow walkers at airport. We were alarmed to see a group of nine 20-30-somethings, most of them lean, long-legged and talking airily about the  marathons they ran last week. We were relieved to meet one other couple around our age – but they turned out to be as fit as the proverbial lop (lop: some say flea, some say hare – but you get the idea.)


We began in the town of , in a very comfortable hotel, and next morning took the bus to a canyon scoured by the Krupa river. Our guide warned us that the area had had a cool, wet spring and that we might find the path a bit wet in places. Ha! We never let him forget that. An hour or so later we all had our boots off and were wading through 2-3 feet of water at the edge of a raging torrent. All good fun (except for those of us with bunions!), but a sharp reminder that nobody can ever predict the conditions in wild country. 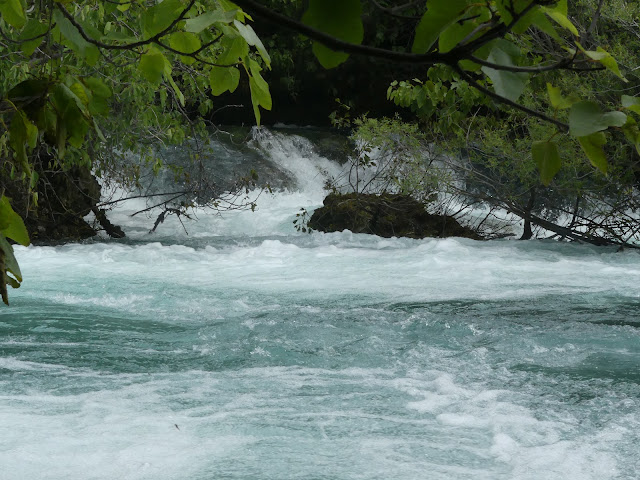 Our second day’s hike was over a stretch of the Markov Grob Plain, below (1,281 metres, or approx. 4,000 feet). The weather was kind, and we were able to picnic in warm sunshine. 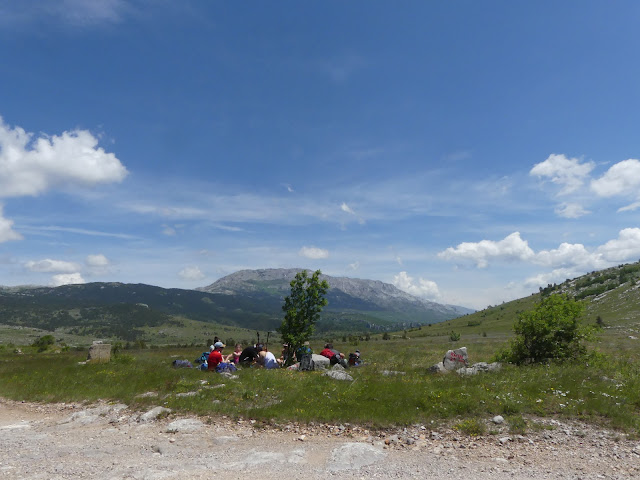 Already we were struck by two features of this landscape: the fantastically eroded and broken limestone rocks, and the wonderful array of wildflowers. At the lower elevations it seemed that summer had more or less arrived. Higher up, we came across newly-emerged crocuses and other spring flowers that we in had finished with two or three months ago. 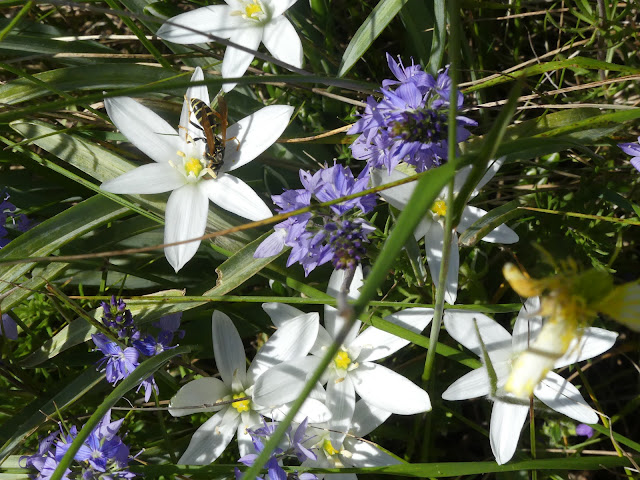 We now passed our first night in a mountain hut. The sleeping arrangements were fine, but A. and I decided to sleep out under the tall, densely packed beech-trees. It’s a thing we like to do every year if we can. The stars were mostly obscured by the canopy of fresh foliage but where they were visible they really did shine brightly. We were up around 0530h drinking coffee – a wise move since the rain kicked in shortly after.


It proved to be a long and horribly wet day. I think we were all soaked to the skin. I didn’t let my camera out of its bag once, so I have no pictures of the downpour, nor of the hunched, bedraggled hikers. This was one of two days when we got soaked, and of course we now learned the difference between a typical hotel in the region and the mountain huts. The hotels had no provision for drying wet gear – why would they, in such a benign climate? – whereas the huts had wood-burning stoves, and boy were we glad of them. Some even had beer for sale, and spirits. Hallelujah.

I mentioned in my previous blog that I rarely seem to go on a summer holiday without encountering snow. I wasn’t disappointed. I believe September is the only month of the year in which I don’t possess a photograph of myself grinning from a snow-bank. Maybe I should put it on the bucket list…. 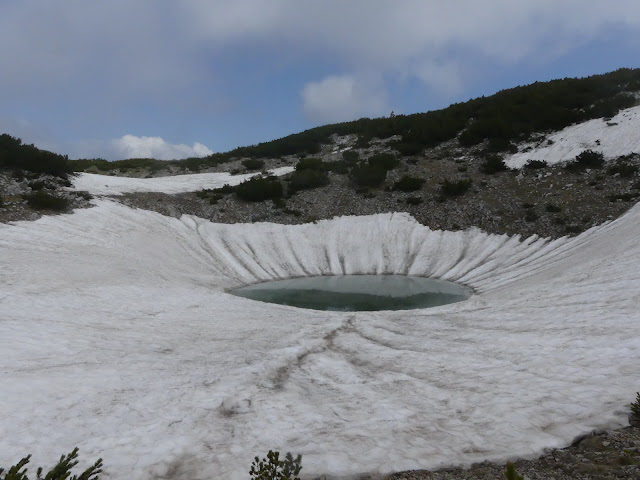 As the week progressed we tackled Sinjal, at 1,831 metres (approx. 5500 feet) the highest peak in , before transferring to and an assault on (2,118 metres or 6,600 feet). The descent from the latter was gruelling: more or less seven hours spent zig-zagging through woods (mostly beech) before arriving in the mixed grass- and woodland of the Diva Grabovica.


By the time our final day arrived the weather had settled down, and we had bright sunshine as we tackled our final hike on the Bjelasnica Massif. Setting out from our super pension in the , we embarked on a long climb that gave us this glorious view of a distant stream, meandering through a lush meadow: 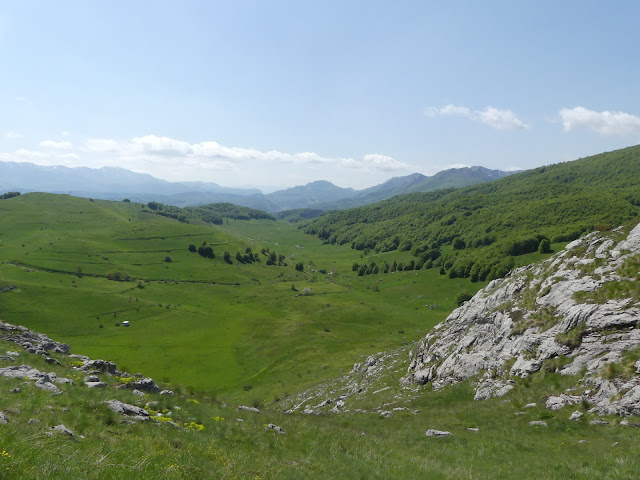 After a stiff and seemingly endless descent we arrived at the , where we were treated to an excellent lunch.


The day ended with a beautiful stroll along the banks of the stream we had viewed from the heights, earlier in the day. 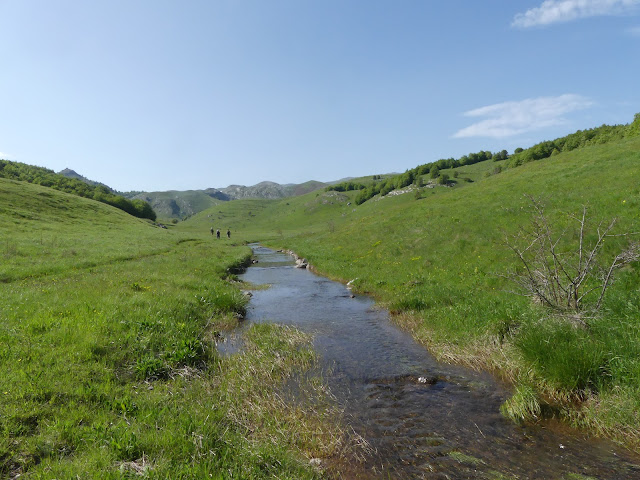 Until A's daughter showed us this trip, as advertised in the Guardian, it had never entered our heads to travel to the Balkans. We were both surprised and delighted to find such fabulous landscapes, friendly people and great hospitality. I can well imagine making another trip, perhaps to stay at one of the village pensions and take day hikes up the mountains.

Well, the muscles have recovered, the kit is clean and dry, and now it's back to the desk; and the allotment. More in due course.