Three Days on Horseback above the Mexican Border


We found Ron Izzo’s outfit on the Net. He sounded as though he knew what he was doing – and as if he cared about the people he took on his horseback rides in the mountains south of . When I phoned him from the he wanted to know our heights and weights, our dietary requirements, and our riding ability. Then he lined up suitable horses for us: a stoic if occasionally distracted stallion called Barney for me, a very handsome and agreeable fellow named Jasper for A. That's him with the grey coat and black spots (below).


Although this was a recreational ride – and not a cheap one – it was billed as an Arizona Horseback Experience, and that meant that we had work to do: saddling and unsaddling the horses, feeding them, combing and brushing them, and leading them to water while Ron cooked our meals and came to check our knots – which needed checking. Not that his own were horse-proof. We were gratified on one or two occasions when his mount, Randy, slipped away went browsing in the long grass.


The first day we climbed until mid-afternoon, then made our only camp, a nice creek-side site from which we climbed, on day two, to a high peak in the (9000-plus feet) before returning for a second night under canvas.


As well as the horses, we had for company Scotty, a three-legged terrier who adopted Ron on one of his trips into Canyon de Chelly. Scotty was a great guard-dog. She scouted around to either side of the trail, sniffing warily at bear poop, scaring up flocks of quail and, when A. took off into the under-brush with a shovel, standing guard. 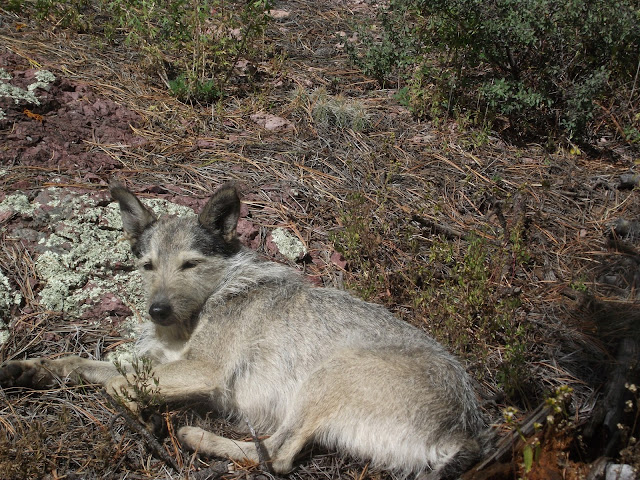 Ron was a terrific guide and host. He was interested to hear that we’d had a half-day ride in the Canyon de Chelly.

He is more than familiar with Navajoland, having grown up on the reservation, married a Navajo and served for a time in the tribal Police Force. He also knows these mountains intimately, and had some great fireside yarns for us about the activities of the illegals who pass through them, and the drug-runners. The latter, he told us, have tried many ruses to escape detection. They’ve been found using  a mock-up of a van, also a fake Border Patrol vehicle. While they use the valleys to travel to and fro, the illegals keep to the higher ground to avoid the smugglers, who regard them as nothing but a damned nuisance and will likely kill them if they get in their way. 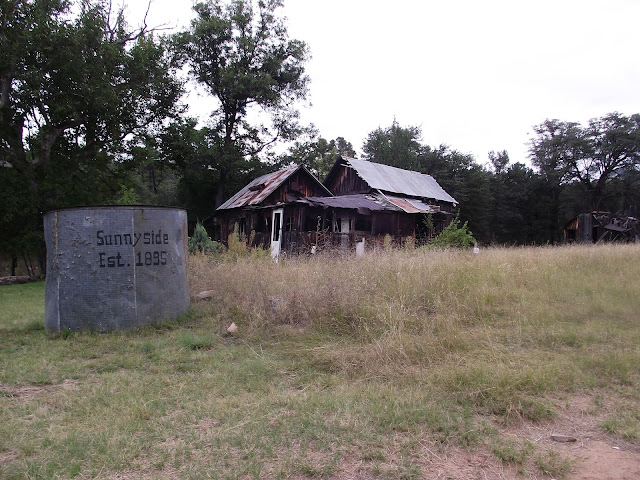 The valley we climbed was settled in the later nineteenth-century by a small community of miners with a religious/charitable ethos. They welcomed strangers who came through. If they were indigent, they offered them food, housing and work. The little town, which once housed a school, church and post office, was called Sunnyside, being on that side of the valley which faced south and west. There are still a few remains (above), but like most frontier-period settlements, it’s rapidly disappearing.


We learned a lot in our three days. By the time we were on our way back to Sonoita we could secure our own saddles, and the pack animals’ gear, swap the bridle for the halter, and make the horses reasonable secure for the night. Neither of us fell off; and while I never persuaded Barney to give up his amble-amble-trot style of progress in favour of a steady walk, I did manage to steer him away from low-hung branches – and I clung on when he slid down the banks of yet another dry creek and scrambled up the rocky side opposite.


Would I do it again? Possibly. My only doubt would be, where would we find an outfitter as professional, knowledgeable, solicitous and courteous as our man Ron? You can find him at www.horsebackexperience.com 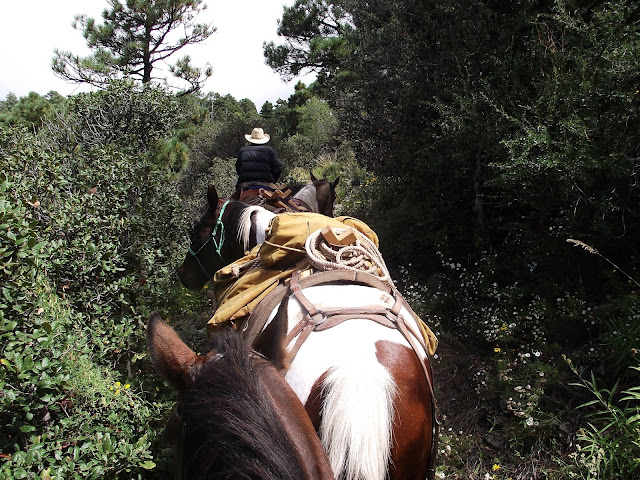