Fifty years ago today: Chelsea 2 Leeds 1 in the F. A. Cup Final replay


At twelve noon on this day in 1970 I left my desk at Heathrow Airport, got a bus to Hounslow West,  underground to Hendon, and hitch-hiked north to watch the F A Cup Final replay between my team, Chelsea, and our most hated rivals, Leeds.

I was in outer Manchester for six-thirty, and at Old Trafford half an hour before kick-off. I had my ticket in my pocket. At ten shillings (50p) it was a sight cheaper than the one I got from a tout for the original final. That set me back £7, about 30% of my week's wage.

I had attended every game of our glorious run to the Final – all except the fourth-round replay at Burnley, when the late Peter Houseman scored a hat-trick in a 3-1 triumph.

Round 3 was a routine 3-0 win v Birmingham

Round 4. My only memory of the first Burnley game was that we were 2-0 up with five minutes to go. My mate Dave, a Norwich supporter, said, 'Makes a change to see your lot win. They never do when I come.' Five minutes later we had conceded twice and had to replay at Turf Moor.

Round 5. It was in the game at Crystal Palace that Chelsea really hit their stride. A few weeks earlier I’d watched them win 5-1 at Selhurst Park (see Birmingham prog, above). This day we settled for 4-1. 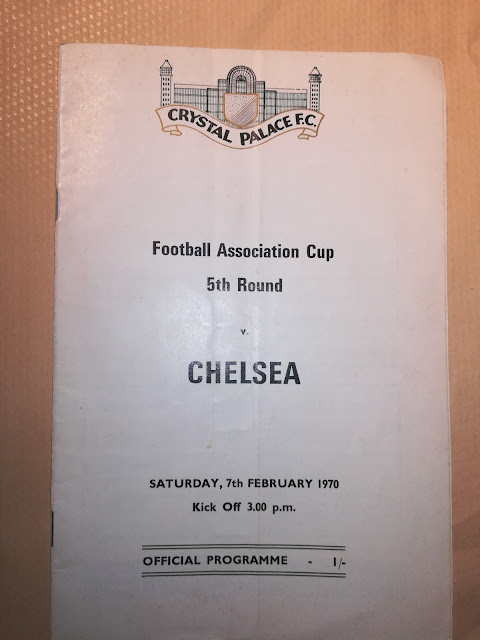 Round 6, the quarter-final. Four more goals at QPR… Chelsea were really flying now, although still trailing Leeds and eventual Champions Everton in the League. QPR fielded two former Chelsea stars, the lightning fast Barry Bridges, and that wily fox (future Barcelona and England manager) Terry Venables. We did them, 4-2.

Semi-final. Then Watford at White Hart Lane. This game was actually closer than the 5-1 scoreline suggests. On a sand-heap of a pitch (typical Tottenham) it was 1-1 well into the second half. Then we went nuts and scored four.

Then on to the Final at Wembley, and yes, I can  admit it now, Chelsea were a tad lucky to get a 2-2 draw with a late, late equaliser from the late great Ian Hutchinson. But it was Leeds, so screw 'em. It wasn't just the fans: the players hated each other too. It's on record.

And finally, Old Trafford. There was that sickening feeling when Leeds went in front, but that made the elation - when (the late) Peter Osgood nodded in Charlie Cooke's pass right below us at the Stretford End - all the greater. In extra time the belief started to grow. From a typically huge throw from Hutchinson, nodded on by John Dempsey, David Webb nodded the ball into the net. Everyone went mental. To this day I recall it as an out of body experience. But I was young, and VERY excited.  The Cup meant more than the League in those days. Truly. It was more or less the only live game on TV every year and attracted a huge audience. 29 million tuned in for this one - more than half the UK population at the time. 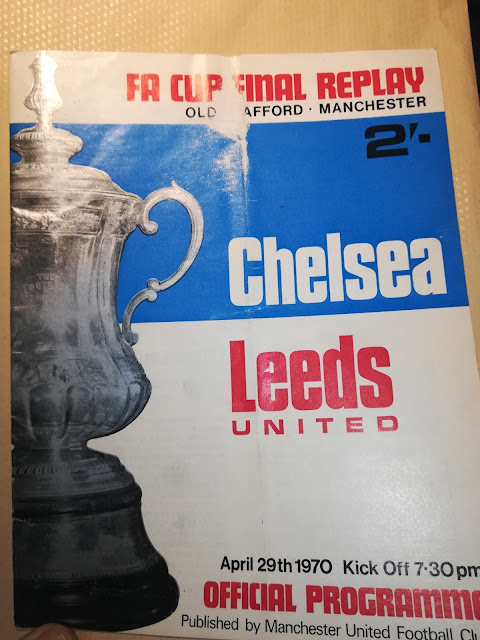 I had been up at 5 that morning to start my shift at the Airport, and I'd hitch-hiked 200 miles north with little thought about how to get home. I followed a singing chanting crowd of CFC supporters to the station, piled on a train, paid my £4 and emerged at Euston about three in the morning. Somehow I found a couple of guys who wanted to head southwest and we shared a cab to Kingston. I walked over the bridge to Hampton Wick, alone, 4 in the morning, singing Ee Aye Addio We Won The Cup at the top of my voice. Grabbed some sleep and went back to work..
Posted by Alan Wilkinson at 11:39:00